Site Manager - Definitions - What are they? 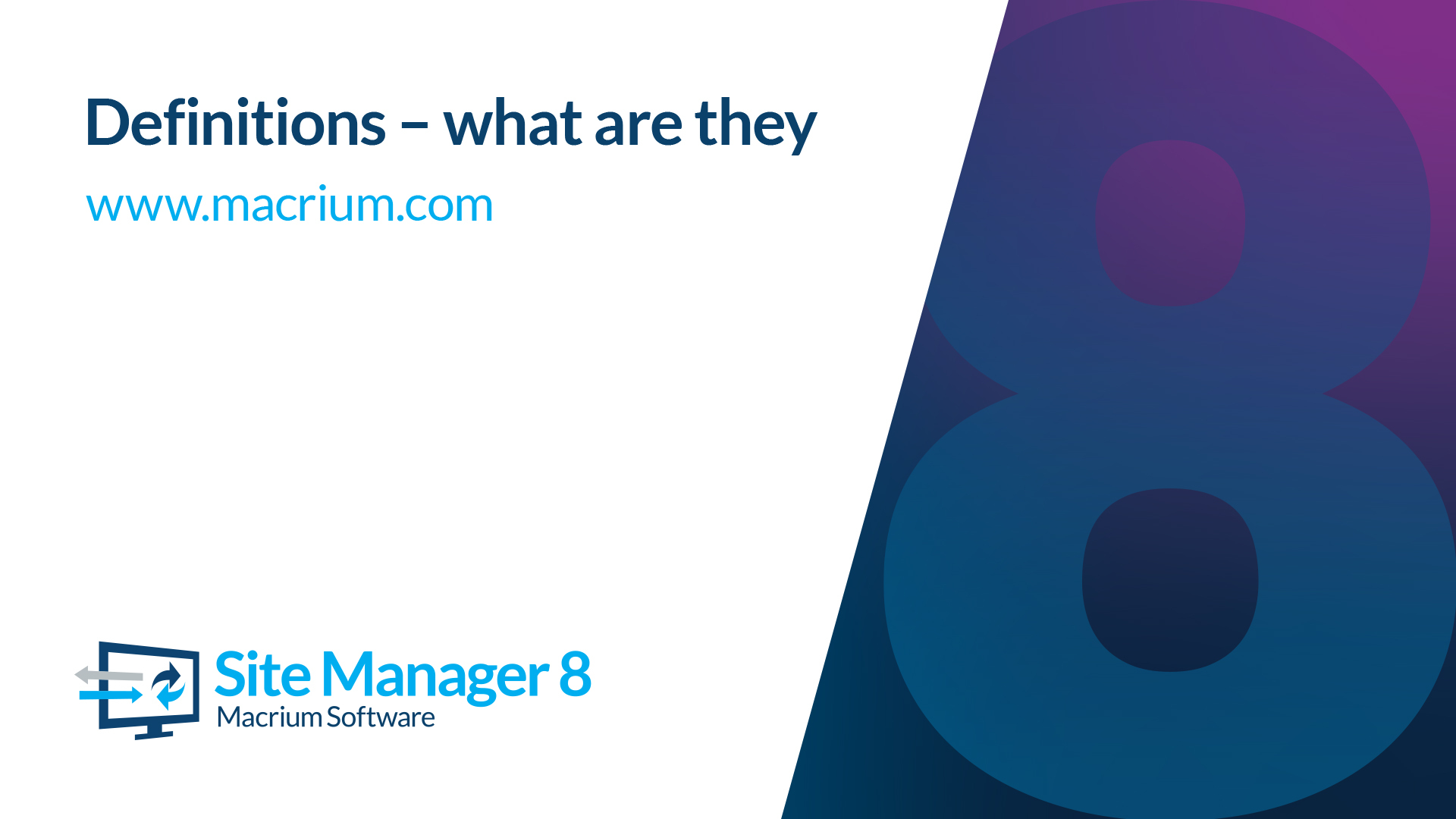 Backup Definitions control which computers are backed up and the data on each computer that is included in the backup. In the case of file and folder backups, this is specifying the folders and files that will be included; in the case of image backups, this is specifying the partitions that will be included. Schedules are paired with definition to run backups on a schedule.

Disk Image - This definition type creates image backups of full disks or partitions. The partitions and disks are specified by selecting from a list of predefined rules. These rules allow you to rapidly specify the disks and partitions that you want to be included in the image for large numbers of computers. 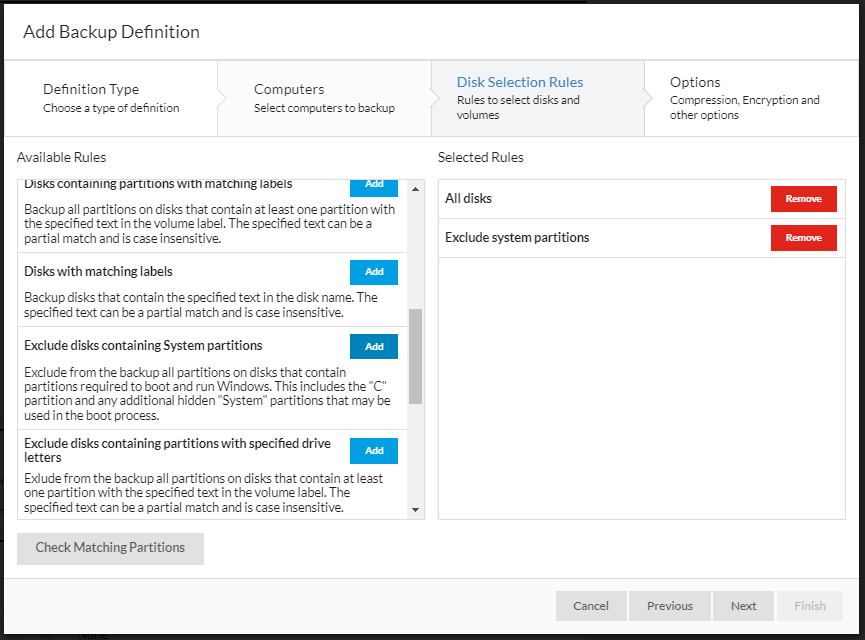 In this example, I want to image all the partitions on CLIENT1 except for the E: data volume. Below are the rules that I am using: 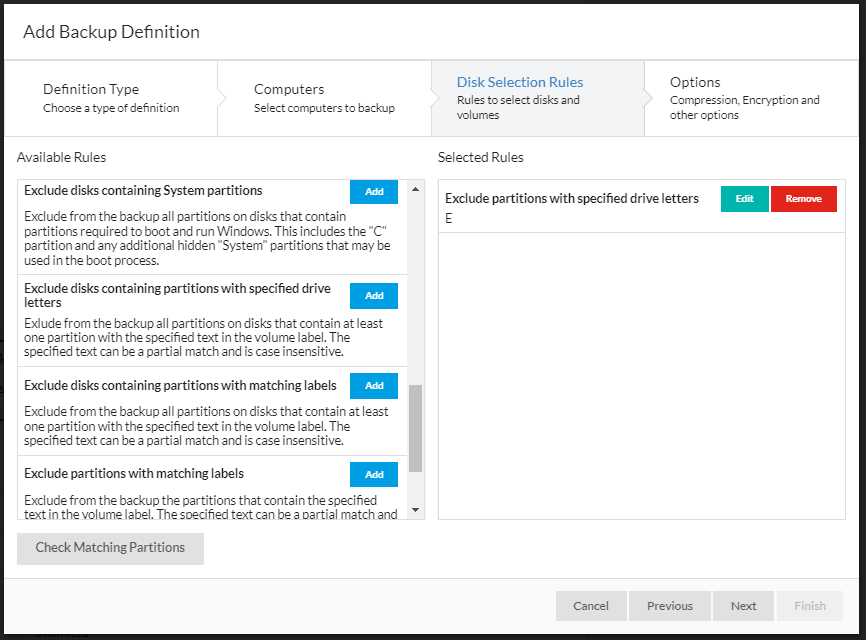 The screenshot below shows how this looks in ‘Check Matching Partitions’: 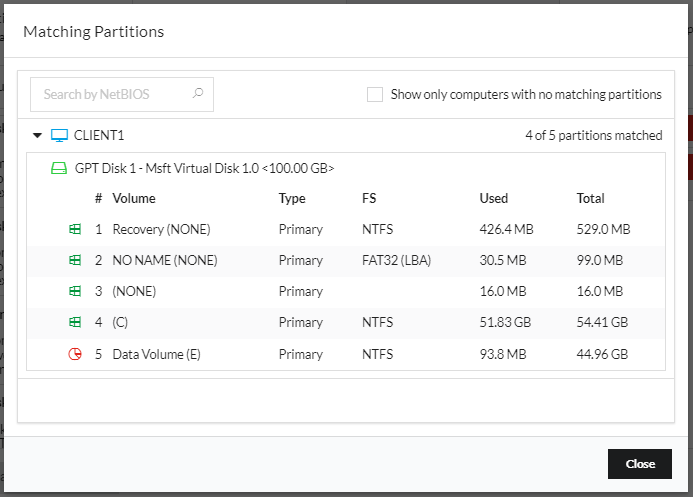 Alternatively, since all the partitions except drive E: are system partitions, I can use the ‘System Partitions’ rule to achieve the same included and excluded partitions: 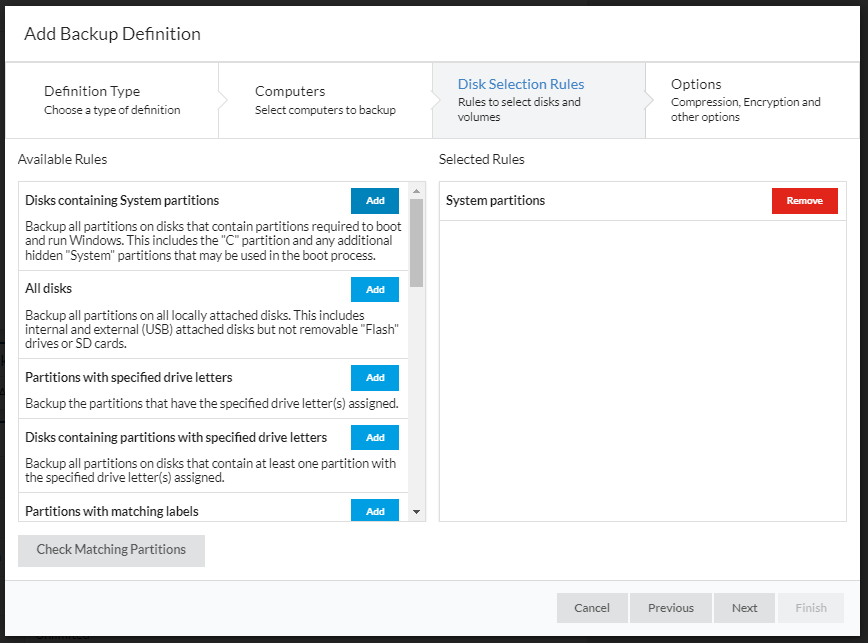 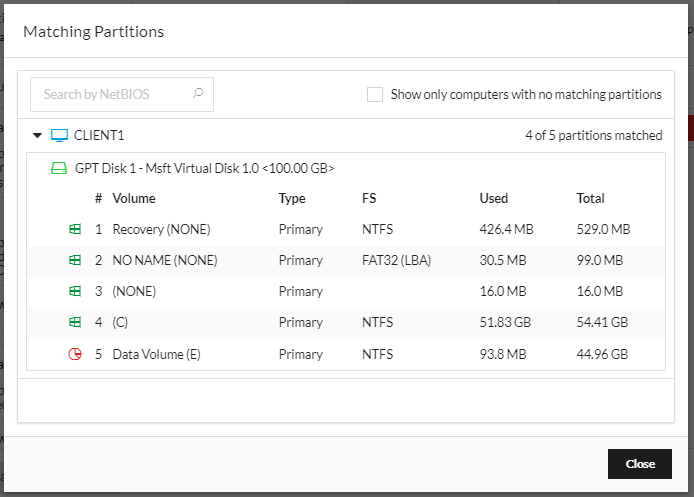 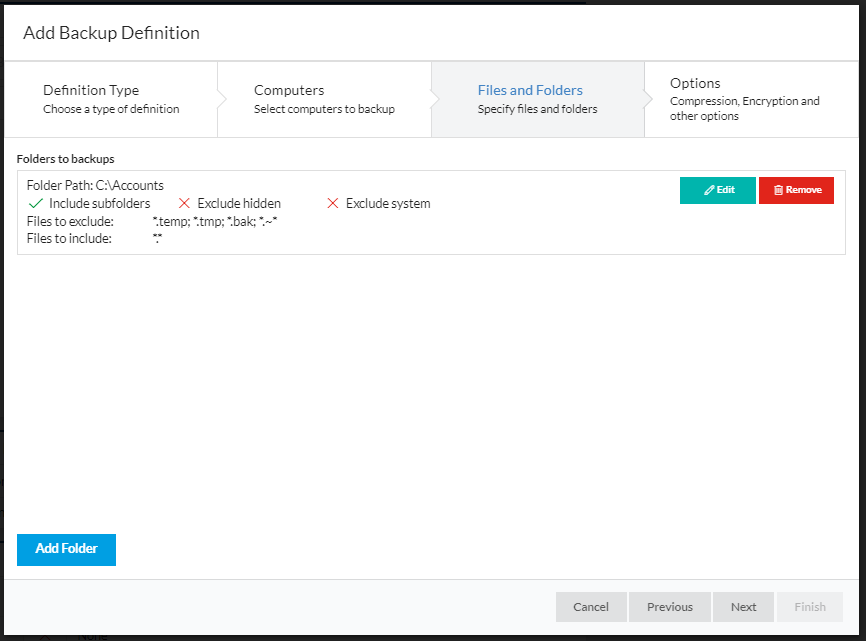 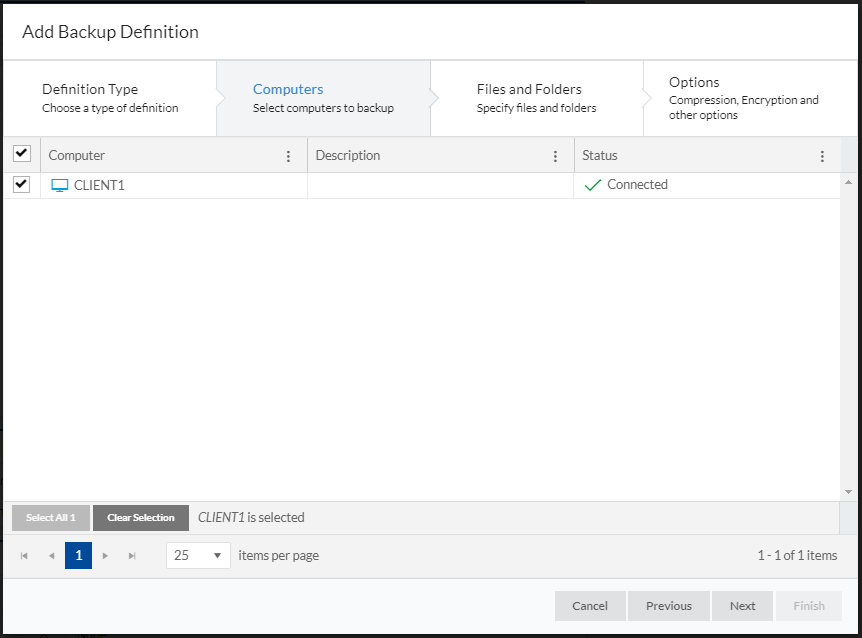 Select Tags - This option allows you to specify computers by selecting one or more tags. There are a number of predefined tags (computers are automatically given these tags when they are added to the Site Manager): e.g. Computer Information\32-bit, Domain\Example.local, Operating System\Windows 10; user defined tags and groups can also be created on the computers page of the Site Manager. The computers that have the tag you selected will be included in the definition. If the tag membership changes in the future, e.g. a computer is removed from the Site Manager, the definition will be automatically updated. 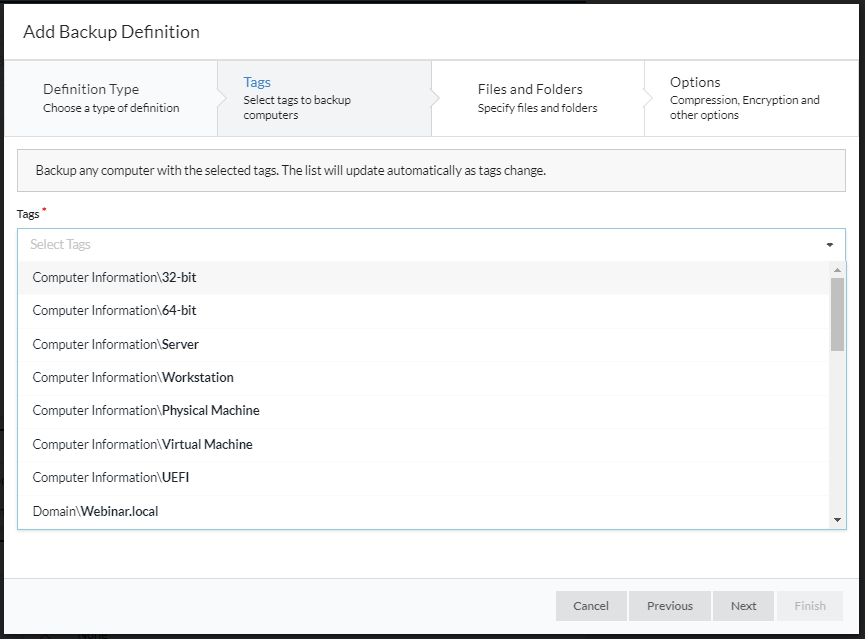 The final page of the wizard allows you to specify advanced options for the backup definition:

Encryption - This will alter the level of encryption that is applied to a backup created by this definition. The default encryption level is none. If encryption is used, then a password must be specified. The encryption key is derived from the password that is provided, using the PBKDF2 algorithm.

CPU Priority - This option will determine the priority that the backup process runs as on the computers you have specified. Lower CPU priorities may result in the backup task taking longer. The default priority is high.

Bandwidth Rate Limit - If enabled, a rate limit can be set for writing to the repository. This will limit the write rate to a specified number of MBit (megabits) per second. This can be used to help manage bandwidth when performing large numbers of backups.

Comment - If a comment is specified on this page of the wizard, it will be saved as part of the backup file and be visible when restoring the backup. 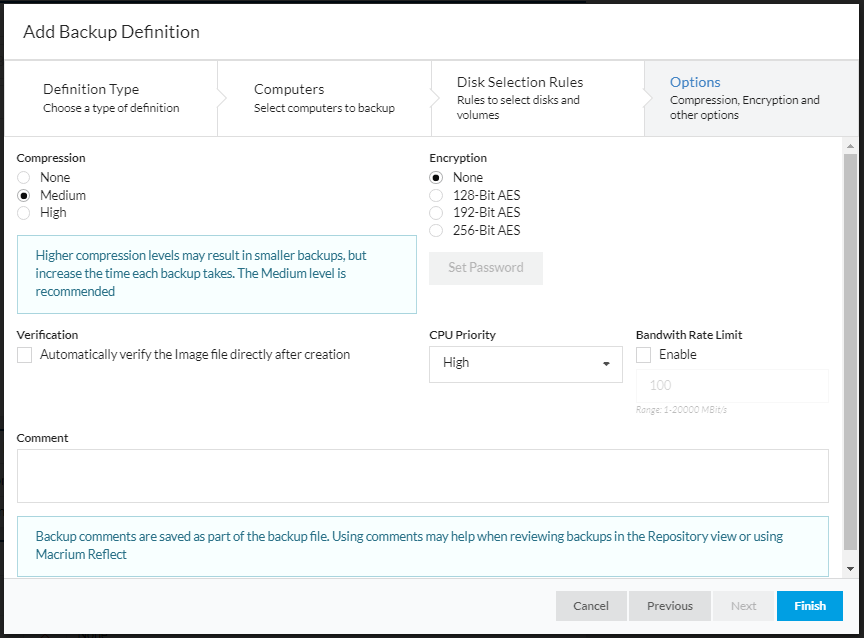 The backup definition can be edited or deleted at any time. You can also manually run the definition without the need for a schedule:

In the ‘Run Now’ wizard, select the computers that you want to backup now, the repository that will be used as a destination, and the type of backup that you want to run. Once you are happy with the selection you have made, press ‘Run’. The backup will then start immediately. If the maximum number of simultaneous backups for the repository you selected is already in progress, or the computer that you have selected to run the backup for already has a backup in progress; the backup will then be added to the backup queue. 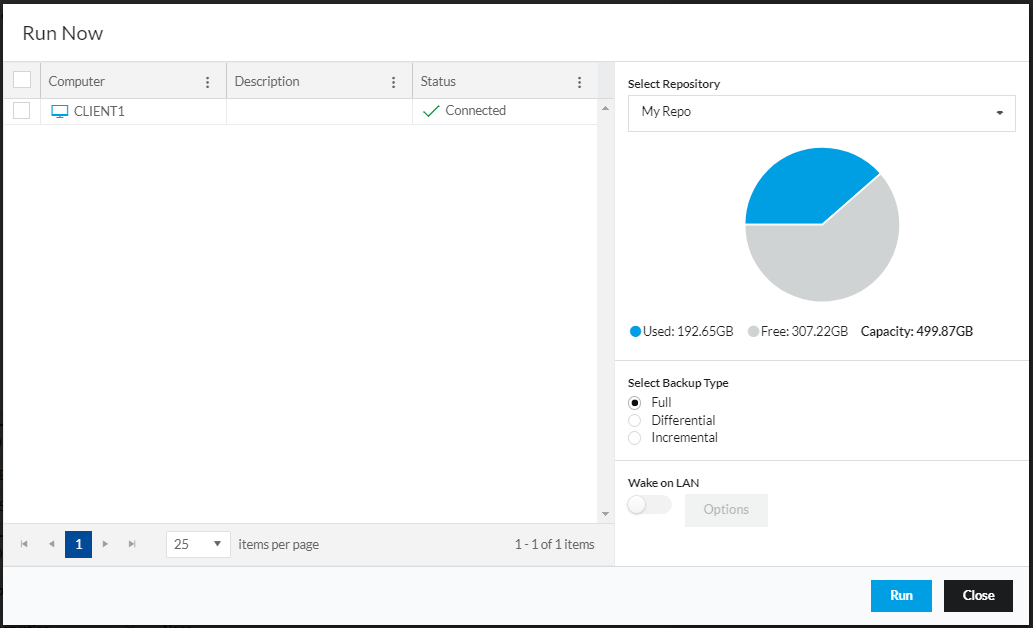 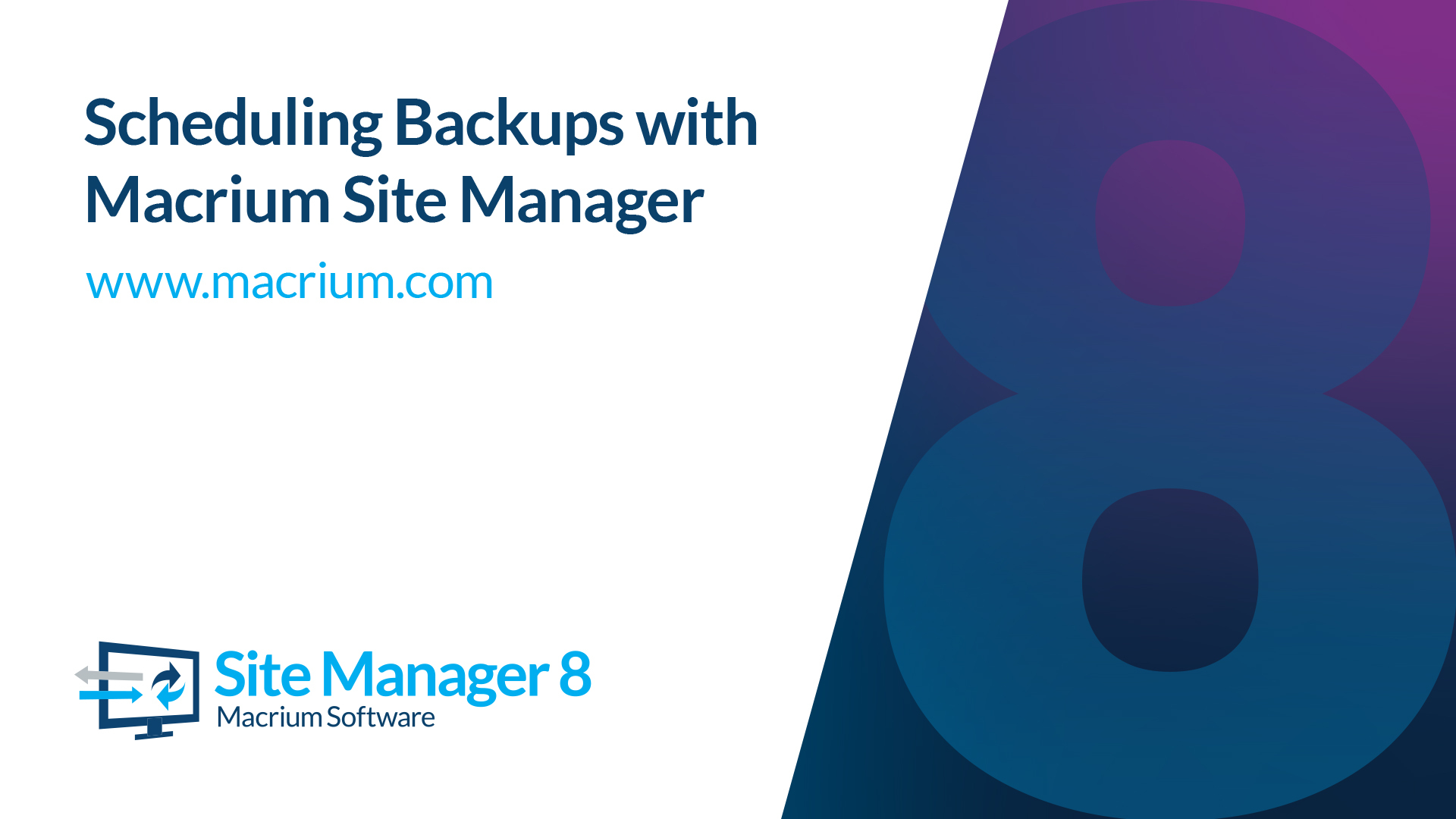 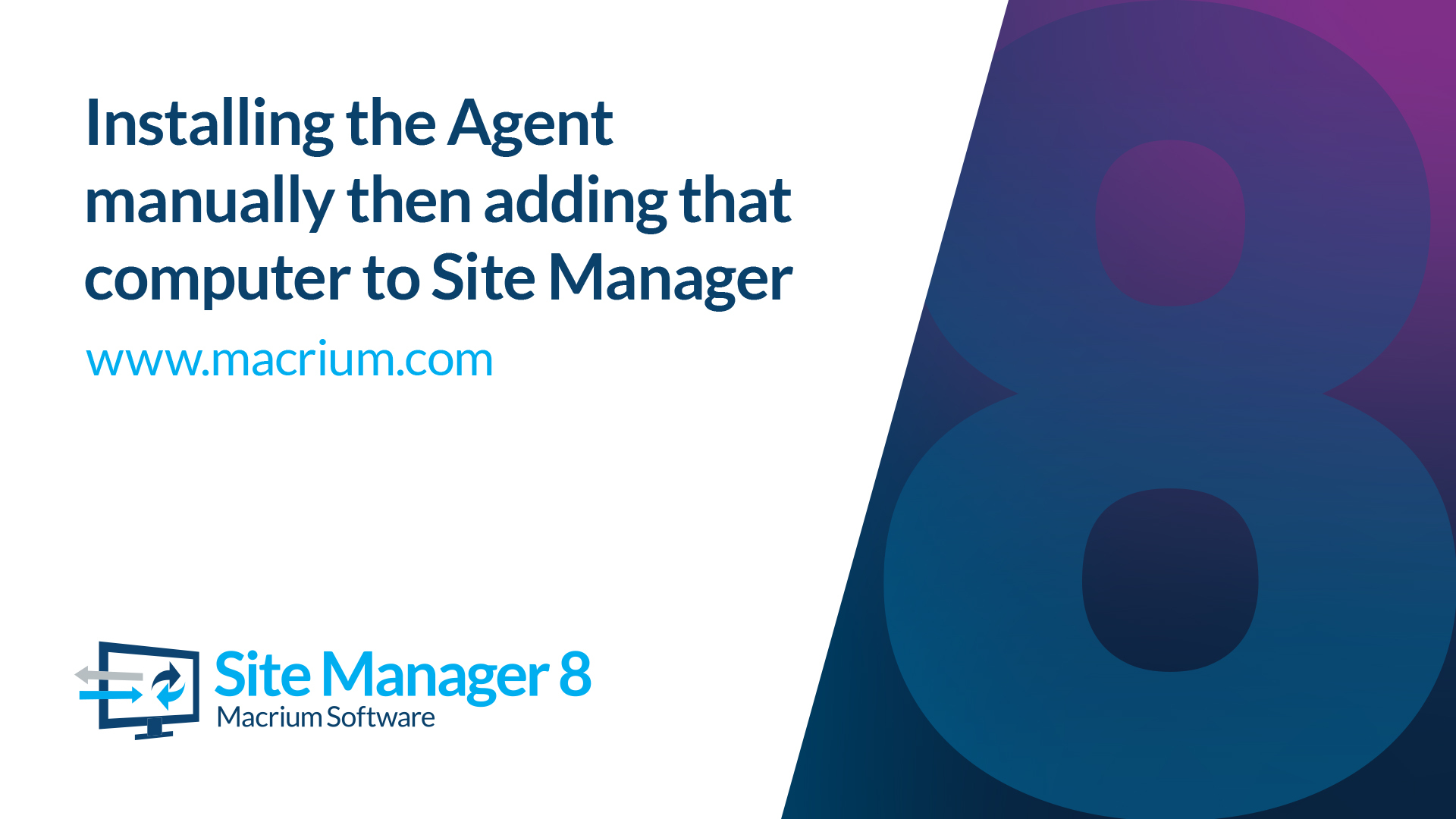 Installing the Agent manually then adding that computer to Site Manager