What is the difference between a disk and a drive? 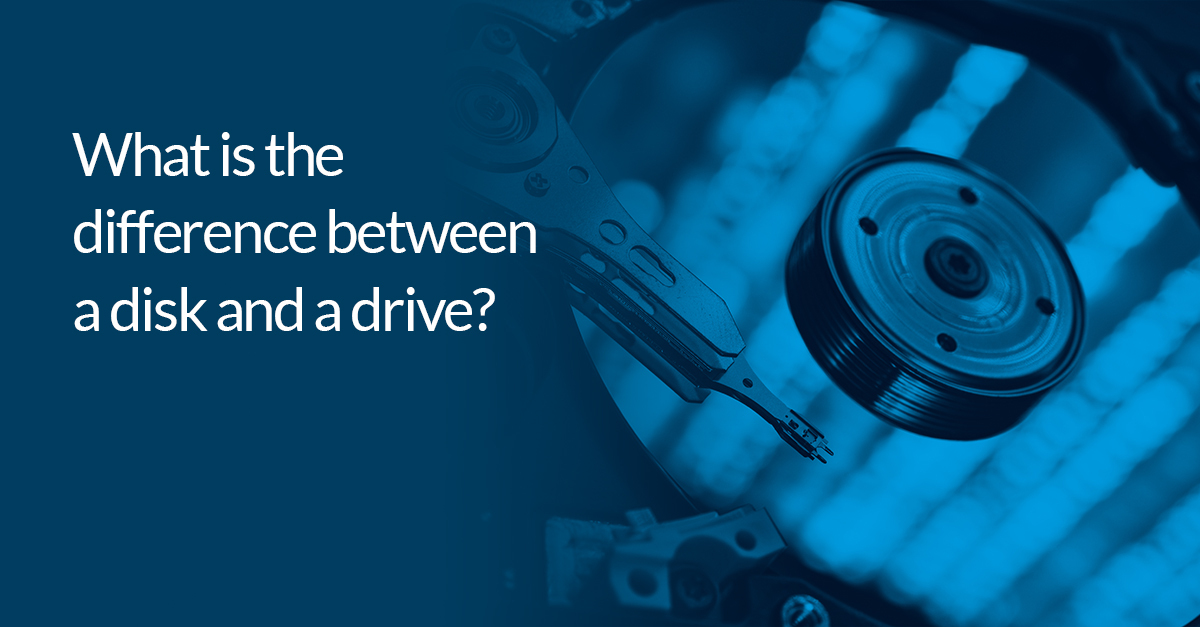 There’s considerable confusion about the main differences between a disk and a drive, particularly in relation to Windows operating systems. Indeed, in many instances the terms are even used interchangeably.

However, there is a short answer: a disk is a physical storage device and a drive is a file system that may exist on part of, or many disks. Unfortunately, that isn’t the end of the story. After all, why is a drive represented as a disk in file explorer?

In this post we’ll look closely at the differences between a disk and a drive and how the confusion has come about.

Disk vs. drive: a historical perspective

As with many computer terms, the difference between a disk and a drive is best understood with a historical perspective. As computers developed, the need for fast online storage followed. Various technologies emerged, but rotating magnetic disk-based storage quickly dominated due to its scalability and reliability.

Up until the 1980s, the ‘media’, the ‘disk’ or ‘disk pack’ was often removable from the drive. In this simpler time, it was clear that the disk was the spinning media and the drive was the mechanics, head assembly,, and associated electronics.

As storage densities have, over time, increased, disks and drivers are now combined into a single unit most commonly known as a Hard Disk Drive.

Disks and drives on the CP/M operating system

In the ‘70’s, the CP/M operating system was developed for the new category of cheap, personal 8 bit microcomputers. These were typically paired with a floppy disk drive, which were a much match in terms of both price and performance. CP/M used the convention of incrementing letters, with a colon suffix, starting with A: to reference the attached floppy drives. Floppy drives are not partitioned: this means each disk can contain a single file system. Because of this, the separation of disk and drive was, at this time, still clear and unproblematic. The disk was the removable media, and the drive was, as mentioned above the mechanics, head assembly and other electronic components.. The first drive was known as A: or the A drive.

Around the time the MS-DOS operating system was being developed for the 16bit 8086, hard disk units were becoming small enough and cheap enough to be fitted to higher end IBM PCs. MS-DOS followed CP/M’s convention of using drive letter assignment. By default MS-DOS reserved A: and B: for attached floppy units; drives C: and onwards were assigned for Hard Disk Drives (HDDs). This is why the windows system is always located on C:.

Unlike floppy drives, hard drives are always partitioned. This enabled multiple file systems to be stored on the much larger HDD. It was also necessary for the Master Boot Record (MBR) boot process.

Hard disks got bigger, and MS-DOS gained a graphical shell (Win 3x and Win 9x) and then was replaced by Windows NT. NTFS became the dominant file system and it became increasingly common to have more than one file system on a disk. For example, both the C: drive and the D: drive could be found on the same disk.

Windows 3 from 20 years ago; the confusion was already baked into the pixels.

RAID adds to the confusion

RAID made the situation even more confusing as it enabled a file system to be stored across multiple disks. The graphic designers of Windows, all too happy to further exacerbate this confusion, used a picture of a disk to denote a drive. If that wasn’t bad enough, the drive nomenclature and iconography was extended to virtual objects such as network shared storage, and file-backed ‘drives’ such as Macrium backups.

On Windows operating systems with an NT kernel (every release since Windows 2000) the drive letter is only an alias for the mounted volume identifier. Windows will attempt to persist the same letter between reboots;

If you’re backing up using Macrium Reflect, the Macrium rescue environment will, if possible, replicate this. However, there are times when this is not possible; Windows will not assign the same drive letter to two volumes even if they are identical such as after a clone operation. You can read more about this in the following knowledgebase article:

As IT budgets tighten, it’s time for a back to basics approach