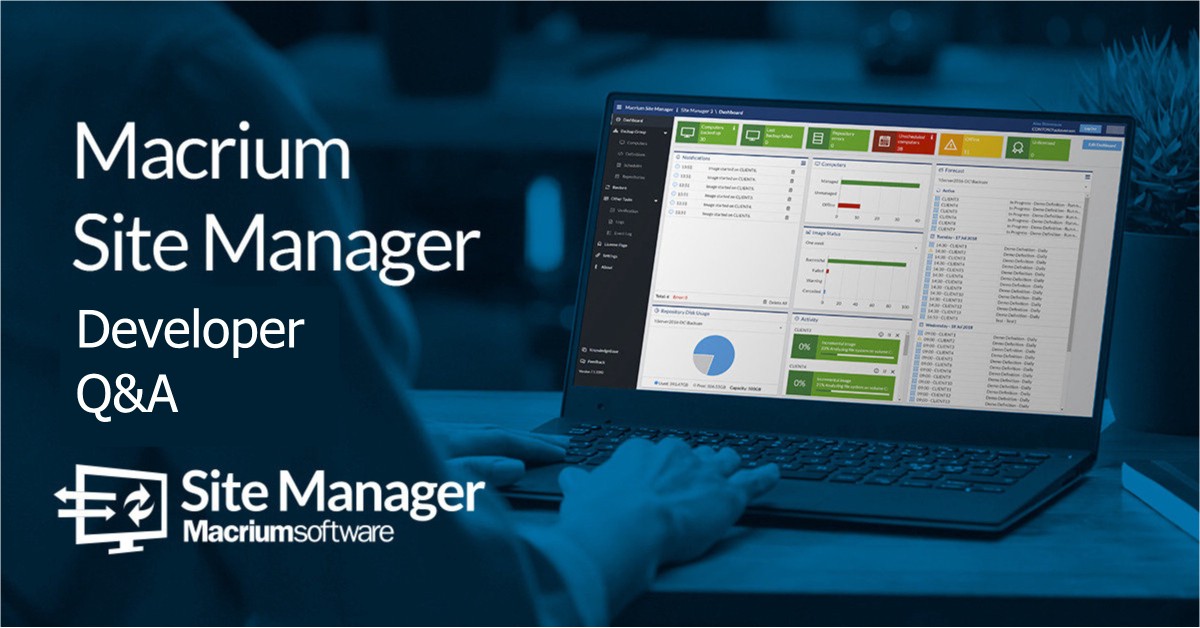 Macrium Site Manager is an important part of the Macrium product family — as a centralized console, it allows users to manage and configure backup at scale, which, for many of our users, is an essential part of using backup successfully.

With some important updates and changes happening very soon, now is a good time to offer you an insight into Site Manager — how we’re developing it, the range of different ways in which it is used, and how it could fit into the future of your data protection strategy.

To do that, we asked Technical Director Alex Stevenson — who leads the Site Manager project from both a product and engineering perspective — some questions. Fortunately, he was happy to respond with some really interesting answers.

Whether you’re a Site Manager user, or an outsider looking in, it presents a clear and detailed view on an important part of Macrium’s future.

Learn more about Macrium Site Manager and download it for free here.

Hi Alex! Who are you and what’s your role at Macrium?

The thinking behind Site Manager

Tell us a bit about Site Manager — what was the initial thinking behind it and how has it evolved over the last few years?

AS: Originally, Site Manager started as a web based remote management tool for Macrium Reflect. It provided a set of tools to perform the same backup and imaging tasks that users could do by running Reflect directly. Once this was up and running, we realised that the larger the number of computers managed, the harder it is to configure each one individually. Rather than just provide a way to configure backups to each computer individually, we took a step back and looked at building a system which could be used to manage a large number of computers without individually configuring each one.

Site Manager today has rule-based backup definitions and centrally managed Repositories so that new computers can be added to Site Manager and start backing up quickly and with minimal configuration.

What might users find interesting about the way it’s built and the approach the team has taken?

Part of our approach is to provide for much more complicated setups than the typical user case, as that allows us to have a system that’s capable of handling all the unusual cases which are required. So while most users will have fairly simple backup definition rules (most often just backup all disks), it’s possible to create very complex rules that can cover many computers (Backup all disks with a partition that has drive letter C, D or E except partitions which have the label “Temp”) so that when there are special circumstances or complex requirements from a user, the system is able to cope.

How users use Site Manager

“We use our support and sales feedback as opportunities to understand how our customers or potential customers want to use Site Manager and use that to modify our development roadmap.”

How do most people use Site Manager?

AS: There’s no one obvious way! There are some broad types of use which we try to accommodate. One is where a small number of servers are backed up, each with different requirements. In this case we see each computer in Site Manager has 1 backup definition and 1 schedule, often with different settings for each. This sort of setup needs individual configurability for each computer and being able to show detailed backup results for each computer — backup admins will often want to see the details on each backup and quickly get in depth reports.

On the opposite end of the spectrum are Site Managers which are set up to backup all computers in a network — servers and workstations. These will often have many computers in a given backup definition and schedule and the Site Manager backup scheduling being relied on to manage simultaneous backups and network traffic. For these users, the detailed backup reporting is less useful because there are so many generated — alerting when things go wrong and being able to quickly locate problem computers and their logs.

“Initially we didn’t anticipate that it would be run in places with no DNS servers, over VPNs, and with many layers of routing between Site Manager and Agents.”

Are there any interesting edge cases you’ve seen? Anything surprising about how people use Site Manager?

AS: One thing that did take us by surprise is the variety of network conditions that Site Manager runs under! Initially we didn’t anticipate that it would be run in places with no DNS servers, over VPNs, and with many layers of routing between Site Manager and Agents. Because of this, we made a decision to change our architecture and move away from MSMQ (Microsoft Message Queuing) based network communications in Q2 2019 and move to TCP/IP socket based — it makes the networking simpler. Site Manager can now communicate in much more limited circumstances than it could before.

Where possible, we use our support and sales feedback as opportunities to understand how our customers or potential customers want to use Site Manager and use that to modify our development roadmap. An example of this is that we noticed a number of cases where users wanted to backup to locally-attached USB disks — this was possibly by sharing the disk on each computer, adding a Site Manager repository for each one and backing up to that, but it required users to go through a lot of steps for each computer. We added the ‘local’ repository type to allow for this use case and make it easier to configure.

What would you say are the key features of Site Manager?

AS: There are probably 4 key features that make it a valuable tool for Macrium users:

The future of Site Manager

“A big part of our future release plans are making the restore and recovery process easier.”

Is there anything in the roadmap that you can reveal? How do you want to evolve Site Manager over the next couple of years?

AS: A big part of our future release plans are making the restore and recovery process easier — the upcoming (maybe, by the time you’re reading this, most recent) major release adds a system to collect driver information from computers and copy driver files to the Site Manager server. These drivers can be used to make Agent-specific rescue media, which contain any network, storage or USB drivers needed to perform restores. This means that if a computer experiences a catastrophic failure (hard disk or OS failure), Site Manager server can generate rescue media that will work on that hardware.

We plan to continue to improve this system to make restoring images simpler and more convenient as if things go wrong and you need to recover from a disaster, it needs to be as simple as possible.

We’re also improving some of our integration to larger IT systems. This includes adding features to make it easier to work with Active Directory domains, providing different login levels and other management tools.

Getting started with Site Manager

What advice/guidance would you give to anyone getting started with Site Manager?

AS: The backup definition/schedule system can seem a bit complicated — it can be worth thinking about how it can be used to simplify things.

For example, you can have multiple backups on the same schedule or have a group of computers backed up on different schedules to different places (e.g. daily to cheap, local storage, monthly to cloud backup) by having many definitions scheduled with one schedule or one definition scheduled with many schedules. If you have any complex requirements, these can help to make them easier to manage, so editing one definition or schedule is all that’s required.

It’s also worth exploring the user interface and looking over some of the side functionality — Site Manager can not only restore backups, but there’s a repository browser that lets you see what backups are there, open them and access individual files inside that backup.

What about more experienced users — how might they get more value from it? What features should they consider exploring?

AS: There are a few useful systems in Site Manager for advanced users. One of the key ones is Agent User Scripting — each Agent can have a script file on it which can be used to control whether that system is allowed to backup. It’s been used to put together systems where laptops only backup when connected directly to the network and not via VPN. Other uses are preventing backups while on WiFi, at certain times, when the system is in heavy user or when a critical process is running.

There’s also the remote sync feature, which can be used to automate maintaining an offsite copy of a backup repository and manage the sync process during backups.

Also, the Site Manager Agent can be run on the client computer and features most features of any Macrium Reflect installation — this can be used for everything from disaster recovery, creating rescue media, and cloning drives.

Thanks for chatting Alex!