Cloud vs. NAS vs. external storage for backup: how do they compare? 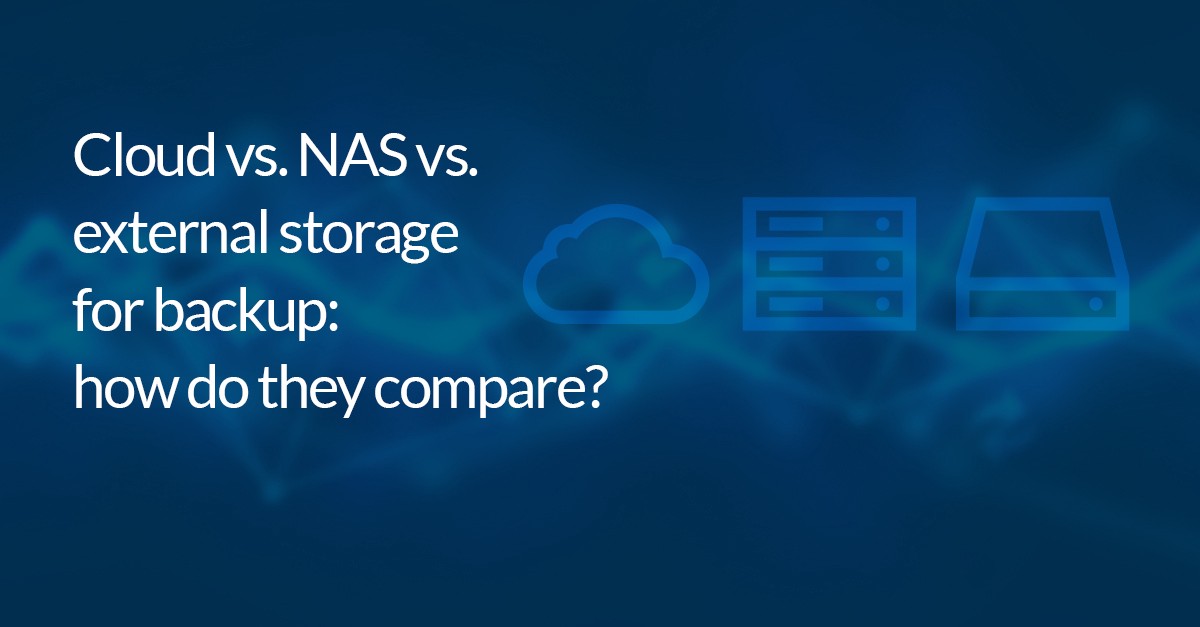 For many people thinking about backup, it’s hard to think outside of the cloud paradigm. Cloud computing has become such an established part of our digital lives — and, moreover, somewhere that feels both limitless in its size and easily accessible — that it seems to just make sense to put important snapshots of your data there. However, cloud backup isn’t always the best approach; while it does have many advantages, there are other options, such as NAS and external hard drives.

In this post we’ll take a look at the differences between cloud backup, NAS, and external hard drives. By evaluating them all together, you’ll be able to come to a more informed decision about which is the right approach for you when it comes to backup.

The popularity of cloud backup has grown rapidly over the last decade. As cloud providers have become more ubiquitous, organizations have gradually come around to the view that it’s necessary to move to the cloud (to a greater or lesser extent). Backup, then, is just one element of this wider industry shift.

And it’s not that hard to see why: using cloud as a way to store and manage backups not only gives you a level of scale in terms of the size of your backups, you also have many other benefits that come with using a third party platform — like automation.

What are the advantages of cloud backup?

The advantages of cloud backup include:

What are the disadvantages of cloud backup?

While cloud backup offers many advantages, there are some reasons to be cautious.

Ultimately, cloud backup makes sense if you don’t have much money to play with in terms of upfront costs, and similarly don’t have the IT resources in place to maintain a more complex set of backups across your network. However, while the convenience is obvious, you do also need to be aware of some of the risks it poses, especially in the longer term.

NAS — Network Attached Storage — is perhaps the most widely used method of backup storage alongside cloud. Compared to cloud backup, there are a number of clear advantages: NAS works out cheaper when you’re storing huge amounts of data, and it is also significantly faster in terms of data availability and accessibility.

The advantages of NAS for storing backup files include:

However, as we’ve seen above, there are some drawbacks to using NAS:

So, NAS makes a lot of sense as a way of storing backup files — it’s not surprising that it remains popular with many businesses. Indeed, as the world becomes increasingly multi-device, it’s not uncommon to see NAS find its way into personal setups, particularly among more technically savvy users that want to avoid relying on a public cloud provider.

Although cloud and NAS are the most widely used methods of storing backup files, there are other approaches. Broadly, many of them can be characterized as external storage.

Typically this will be an external hard drive. But it’s also possible to use things like a USB stick.

For large organizations, of course, this doesn’t make sense at all. And while it can make sense for home users in certain scenarios, there are occasions where such an approach could be used in a business setting. Cheap and portable, external devices are a straightforward way of getting the backup job done quickly and easily.

Here are the main advantages of using devices like external hard drives to store backups:

External hard drives and other devices can come in handy for backup purposes, but it’s important to be careful with when and how you use them. Some of the disadvantages include:

Ultimately, while external devices can play a part in your backup strategy, it’s important to be wary of them. If the whole point of backup is to minimize the risk of disaster, using external storage can easily just introduce another potential point of failure.

Conclusion: Be mindful of costs and how you or your organization operates

When it comes to storage for backups, it’s essential to be mindful of what’s going to work best for you. Don’t rush into one approach just because it’s the most convenient — or, indeed, because it’s cheap.

An important step here is to be aware of the different types of backups that feature in your overall backup schedule and strategy. There are, for example, significant differences in terms of cost and bandwidth between full image backup and file and folder backups. To solve this,. You could adopt an approach whereby you store image backups locally and only sync file and folder backups. In the event of disaster, you can re-install the operating system and software and recover the irreplaceable file and folder data from your offsite cloud backup.

Ultimately all these decisions need to be a part of your wider approach to digital hygiene and cyber security. If you’re aware of how you or your business uses its data then it will become much easier to make an informed decision that keeps your data safe, and makes recovery easy. 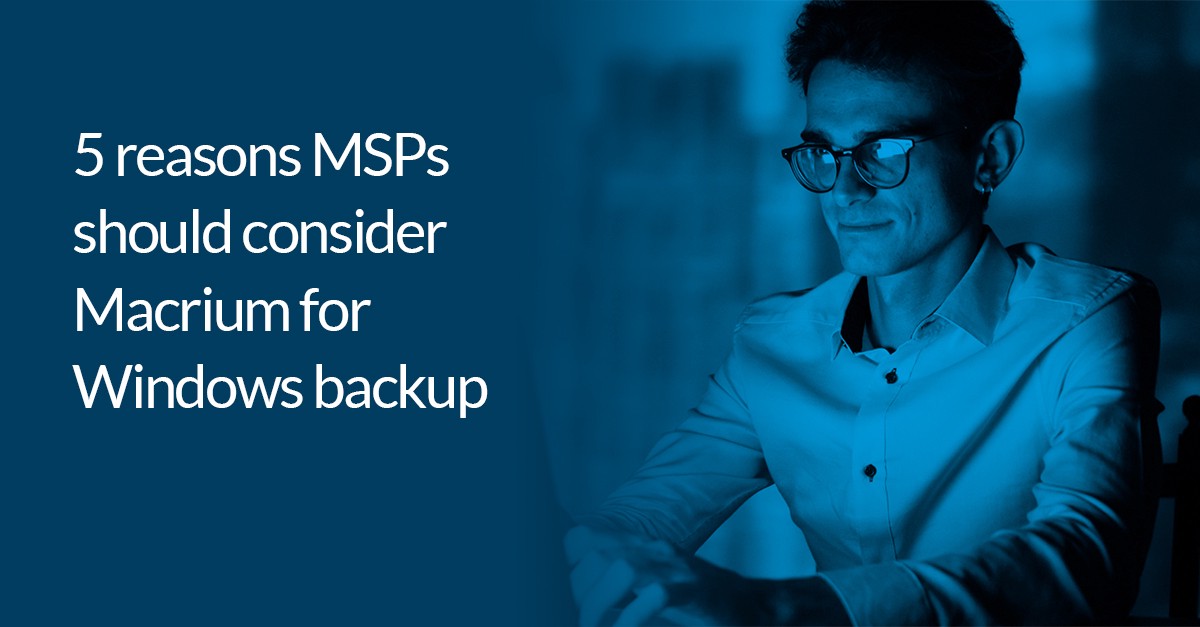 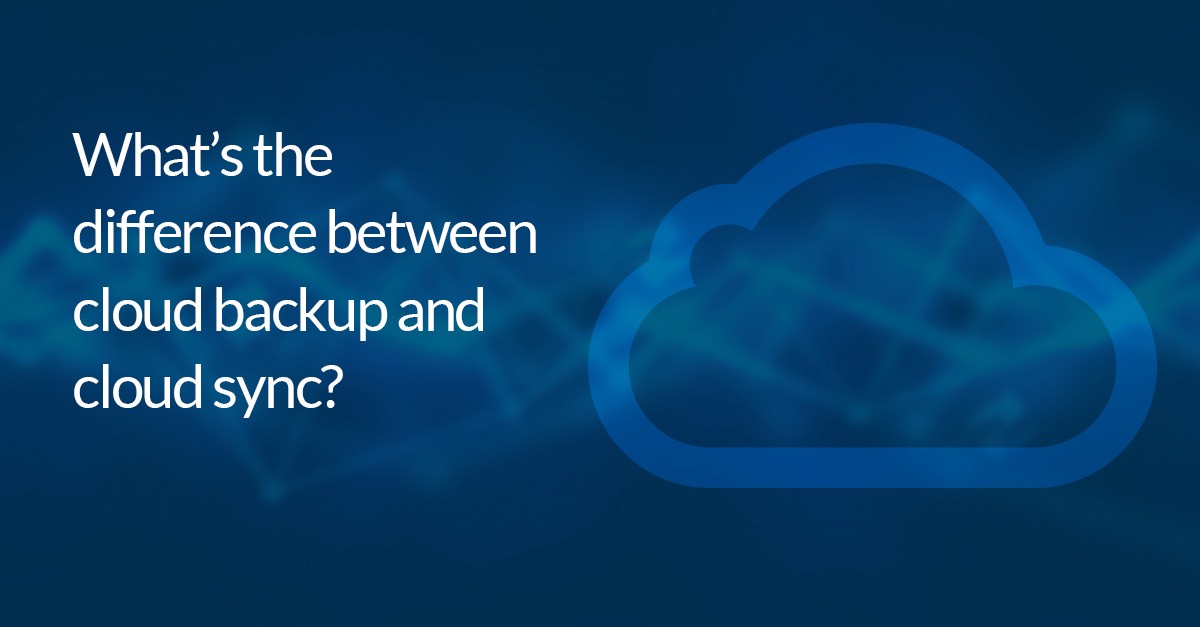